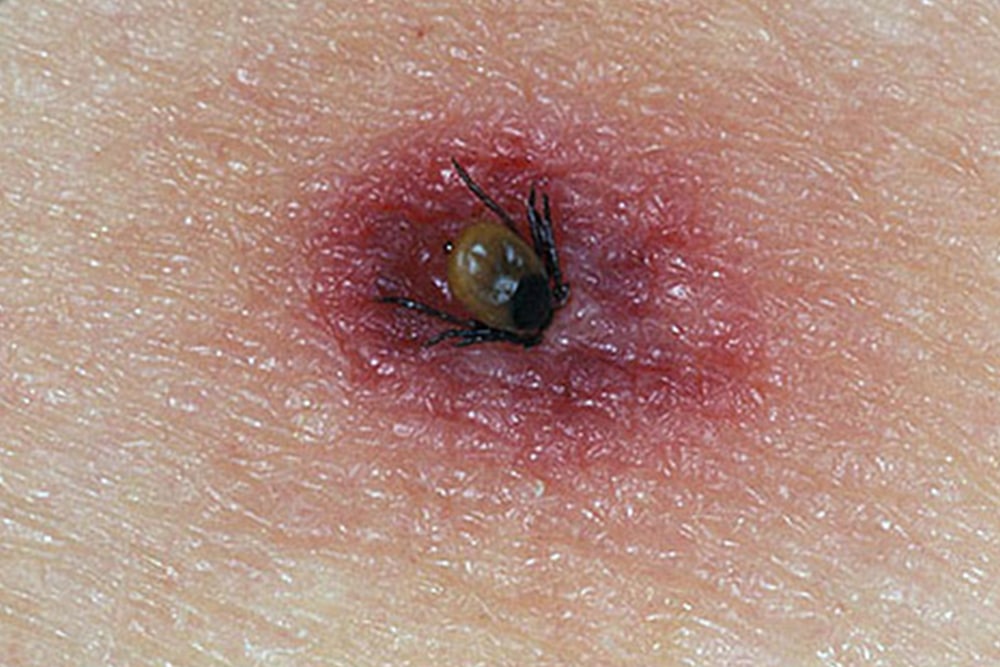 Lyme disease occurs in three stages. The stages of lyme disease are known as Early Localized, Early Disseminated, and Late Disseminated.  The severity of the symptoms can depend upon where the infection has spread in your body, genetic susceptibility, the strength of your immune system, if the tick that bit you carried any co-infections, and the length of time the infection has been in your body.

During Early Localized Lyme disease, the infection has not yet spread throughout the body.  Therefore, the earlier it is diagnosed, the easier it is to treat.  During the first few weeks of infection, some people develop a “bullseye” rash.  The technical name of this rash is erythema migrans, and it occurs at the site of the tick bite.  This rash is a sign that the bacteria is multiplying in the bloodstream.  It looks like a central red spot surrounded by a clear spot with a red circle at the edge.  While this rash is said to be characteristic of Lyme disease, many people instead develop a plain red rash and others don’t develop a rash at all.  I, for one, never developed a rash when I became infected. 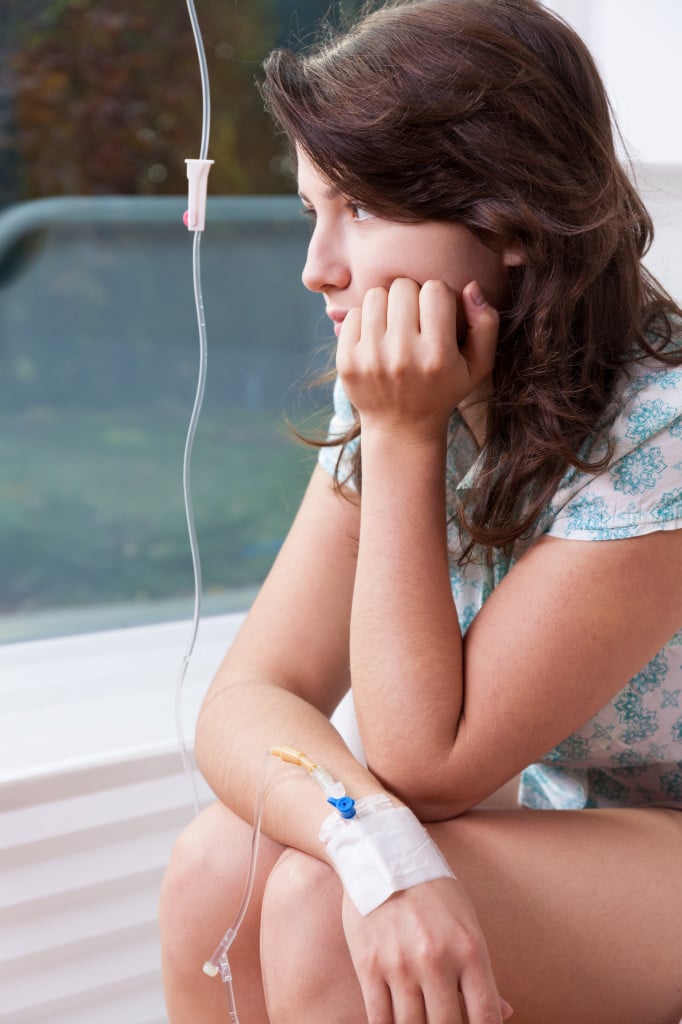 My initial symptoms were full blown encephalitis.  I was completely fine one day, and the next day my entire world had changed.  In a matter of moments, it felt like my body was shutting down; I began to feel this immense pressure in my brain; I had trouble performing basic functions like swallowing; my vision and balance became disturbed; as well as my ability to form thoughts.  Before I knew it, my co-workers were having me lie down on the cold floor because they thought that I was having a heat stroke.  I remember looking up at my boss as the rest of my body became numb and thinking, “This is it. I am dying.”

It wasn’t until years later, I learned that my initial reaction was the result of a tick bite, and that the tick that bit me not only infected me with Lyme disease but the co-infections Powassan virus, Bartonella, and Protomyxzoa Rhuematica as well.  We believe that Powassan virus may have been the cause of the initial encephalitis.  Last summer in 2013, there were many cases of people being infected by Powassan virus on the east coast. It was stated that it is fatal in 30% of people infected by this disease.  They were calling it the new tick borne infection.  However, Powassan virus is by no means a new disease.  It is just highly unrecognized.  Unfortunately for me, because of the lack of understanding about tick borne illnesses, my symptoms were not being taken seriously. This began my progression into Early and Late Disseminated Lyme disease/tick borne infections.

There are some cases where a person is only infected by Lyme disease and not other co-infections.  For these people the symptoms are a lot less severe.  Also, depending upon the person’s immune system, their body may be able to tolerate the infection better than others.  In these cases, the initial common symptoms are flu-like symptoms, fatigue, muscle aches, and headaches.

Stage Two is known as Early Disseminated Lyme disease.  It occurs several weeks after the tick bite, as the bacteria is beginning to spread throughout the body.  At this point, more serious symptoms may trigger a need for treatment because the infection can affect the skin, joints, nervous system, and heart.  Rashes may appear in other parts of your body; there may be pain or numbness in the arms or legs as the joints begin to swell; and your headaches may become more severe and frequent, escalating into bells palsy.  It is also very common to have a reduced ability to concentrate, heart palpitations, fainting spells, balance issues, and the inability to tolerate heat, noise, smells, and lights.  Meningitis and cardiac disturbances may occur at this time too, as the infection will attack whatever is genetically weak in your system.

During my experience in this stage, the head pressure from the inflammation of my brain increased. The pressure would migrate to different areas of my brain, and at times the pressure felt so heavy that I wouldn’t be able to lift my head off my pillow.  When I did have to get up, I would have to hold my head with my hand on my chin to relieve some of the pressure.  I began to develop intense noise, heat, and light sensitivities; I lost control over my balance and experienced constant vertigo; and my fatigue was like nothing I had experienced before, as I felt like I was a walking zombie. My ears also began to feel very full and were in continual excruciating pain.  I remember not even being able to touch the fabric of my shirt to my ears when I put on clothing because it was so sensitive.  My ear was constantly bright red and felt like it was burning to the touch. Later, I was diagnosed with 70% nerve damage to my left inner ear, which the doctors told me was due to Labyrinthitis.   My neck began to feel increasingly stiff until I lost all control over it.  At this time, the doctors told me I had cervical dystonia.  Cervical dystonia is a painful movement disorder in which your neck muscles contract involuntarily or can cause your head to uncontrollably tilt forward or backward.  To this day, I receive injections every three months to paralyze the muscles from contracting so that I can have more control over my neck.

Throughout each of these stages, as my body continued to shut down, my family and I repeatedly asked if Lyme could be the cause of all of these symptoms.  Our answer was always, “No Chronic Lyme does not exist. That is not what you have.”  One doctor even smashed his fist on the table and told me that I was not allowed to ask this question again in his office.  While this reaction seems absurd, this is a common occurrence for many Lyme suffers searching for answers in a medical community that does not recognize Chronic Lyme disease.

Stage Three is known as Late Disseminated Lyme disease and can occur weeks, months, or even years after the tick bite.  It is the last and most serious stage.  It consists of people with an active infection of a prolonged duration that have a higher spirochete load, weaker defense mechanisms, greater virulent or resistant strains, are most likely heavily co-infected, and are dealing with a significant amount of neurotoxins.

At this point there can be considerable damage to the joints, nerves, and the brain causing symptoms of muscle paralysis, arthritis, severe cognitive and psychiatric issues, heart problems (such as inflammation of the structures surrounding the heart), disabling fatigue, thyroid issues, neuropathy, and many more issues.  Lyme disease can affect any part of your body, which is why it is known as, “The Great Imitator”.

Not only are the symptoms a lot more serious, but patients require a full evaluation for all of these symptoms and each irregularity must be addressed in order to recover.  Treatment related problems become a lot more complicated as well.  Many people begin to develop antibiotic resistance, colitis, Candida (yeast overgrowth), intravenous catheter complications, and abnormalities in the blood counts, just to name a few.  Treatment modalities also become more extensive.  At this late stage, the goal is not only to reduce the pathogenic load in one’s system, but also to treat food sensitivities, heavy metal issues, and mycotoxin accumulation.  Individuals should also seek help with cell membrane repair therapies, rehabilitation exercises and programs, nutritional supplements, enforcing rest, and avoiding stress. At this stage, people suffering with Lyme disease, will have a very difficult time fully recovering and may have to maintain an open-ended, or an on-going therapy plan.

When I reached this stage, the disease had completely invaded my brain and I was becoming increasingly more debilitated.  Even with over a year of antibiotic treatment for Lyme disease, I was still not seeing any improvements and the infections within me were winning. I was becoming entirely controlled by this disease, and I didn’t know how I would ever get out of this nightmare.  Even though I didn’t feel like myself, I knew that I was still in there somewhere.  I was in dire straits and decided to look into an alternative treatment.  Shortly after, I underwent Whole-Body Hyperthermia treatment and a very extensive detoxification and cell membrane repair post-treatment protocol. I began to feel more and more like myself, as I continued with treatment.  For the first time I was improving and the disease was no longer winning.

Before becoming ill, I could have never imagined people suffering the way that I had.  Many of my symptoms felt as though they weren’t even humanly possible. Until you go through it yourself, no one can really imagine the pain that Lyme sufferers endure.  Even while I write this, I feel as if it doesn’t come close to giving justice to how truly painful and debilitating this disease can be.  My main goal with this blog is to spread the message that you are not alone and that there is hope in moving forward to a path of getting your life back.  In the words of Winston Churchill, “Never, ever, ever give up!”